How to Test a Car Battery? Have you faced this type of problem in your journey? Car batteries or automotive batteries are rechargeable batteries used to power motor vehicles. By providing an electric current, it starts the chemically-powered internal combustion engine that actually propels the vehicle by electrically starting the electric-powered starting motor. It is part of the car’s starting system where the battery is located. Let’s start!

How to Test a Car Battery? Basic Concept

Batteries in cars eventually stop working, and diagnosing the problem accurately is crucial. There is no doubt that car batteries are essential for the operation of the vehicle, but, like everything else, they will eventually fail as well.

The most common sign that your vehicle has been damaged by this is that it would not start or the engine turns over weakly. It is important to determine whether your battery is drained and needs to be recharged, or if it is too weak to hold a charge, before starting your vehicle when your battery runs down and you cannot start it.

There are times when low or dead batteries simply need to be charged or boosted in order to function. The batteries need to be replaced when they lose their ability to hold a charge after a certain period of time.

Other factors for Testing of a Car Battery

In order to determine the problem with your battery, it is important to perform a proper battery testing procedure. With a dedicated battery tester, you can easily test the health of your car’s battery in a detailed manner. A multimeter could be used, but you would not get the same amount of information about what is going on inside the battery as you would with a multimeter.

For the testing of a car battery you might require the following tools:

What is the Process to Test a Car Battery

Put the battery in the garage for a couple of days, then avoid driving

Test out the voltage

Carrying out the cranking test

Carrying out the charge test 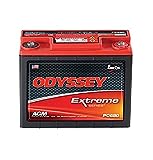 Testing the Battery of a Car with a Multimeter

In the field of electronic measurement, a multimeter is one of the most widely used devices, which allows you to measure voltage, amps, and resistance in electrical sources. An automotive multimeter is most commonly used in order to test the strength of a car battery, which is the most common application for the device.

As long as the unit is used correctly, it can provide voltage information to a high degree of accuracy on a digital readout, depending on the voltage level. When determining whether a battery is strong and healthy or if it needs to be replaced, it is crucial to understand the data provided by the device. Let’s see the steps for testing the Battery of a Car with a Multimeter:

Make sure the battery is prepared

The first step in this process is to locate the vehicle battery’s positive and negative terminals and determine whether there is any dirt or corrosion present at the terminals. In order to do this, you should consult the owner’s manual. Positive terminals are usually surrounded by a red cover and are often marked with a plus sign.

Negative terminals are usually marked with a minus sign and are usually covered in black. The multimeter should be scrubbed down with fine-grit sandpaper in order to remove corrosive buildup, as corrosive buildup can prevent the multimeter from taking accurate voltage readings. In order to prevent skin exposure to harmful chemicals and acidic battery fluid, gloves should be worn when handling these substances. As soon as the terminals have been cleaned, they will be used for attaching the probes to the multimeter once they have been cleaned.

There are many measurement settings on the multimeter, which may make it appear complicated at first glance, but its general operation is fairly straightforward. A multimeter dial should be turned to the “20 volts” setting if you wish to test the electrical output of a vehicle battery by using a multimeter.

Nonetheless, in order for an accurate reading to be obtained from the multimeter, all surface charges from the battery must first be removed before the multimeter can be used. It is recommended that the headlights are turned on for about two minutes, then they should be turned off in order to accomplish this.

The process for measuring and analyzing are as follows

When it comes to testing the alternator, make sure that virtually all of the vehicle’s electrical equipment is turned on – the headlights, interior illumination, climate controls, and stereo. By doing this, you will be able to maximize the voltage load. There is a possibility that the alternator may need to be replaced if the multimeter reading drops below 13.5 volts, which means the alternator may be struggling to charge the battery properly. In order to get a second opinion on your case, you should consult a licensed professional.

In order for a car owner to be able to provide a valuable amount of information regarding the battery and electrical system of a car, it is crucial that he or she use a multimeter in order to collect valuable information. By performing periodic testing, we can be able to predict and prevent imminent failures, which are often unwelcome surprises when they occur.

What do you need to know about how to test a car battery at home without using any tools?

If you are not a mechanic, it can sound intimidating to perform any “test” on your car. The good news is that this one is fairly straightforward to understand.

There is a possibility that your battery does not pass the load test if your headlights dim noticeably as your engine turns over. It is important to make sure that the battery holds enough charge so that it can handle the 10 -15 minutes before the engine starts, as well as once the engine starts. There is a high probability that if your car’s battery is not working correctly here, it will need to be replaced before it fails you on the road.

The corrosion on the battery of your car, aside from looking like something that would ooze out of an evil scientist’s lab, could also be a sign that something is wrong with the power.

In the course of time, corrosion, caused by the hydrogen gas released by the acid within the battery, may interfere with the battery terminals’ ability to transfer power as a result of the corrosion. In order to compensate for this, the battery has to work harder, and as a result, its life can be shortened.

There are several household items that you can use to clean the battery terminals, such as baking soda and an old toothbrush. However, if you have been suffering from corrosion for a long period of time, you may have irreversible damage to your battery. That is why it would be a good idea to replace your car battery in such a case.

Pay attention to the clicks.

In the ignition, if you turn the key over, you should hear a lively roar that settles into a purr after a few seconds. If you hear a clicking sound instead of the normal sound, then your car battery is probably dead. It is possible for a single click, on the other hand, to indicate that there is a problem with the starter.

Those clicks may not indicate that you need a new battery, but they are a good indicator that you should replace your battery. Regardless of whether a jump start is able to get the vehicle started, the first place you should turn to is a shop with an experienced, trusted technician

Although the results are not fully accurate but still the performance of a virtual battery tester is something to be amazed about. The things you must keep in mind are

You can find out the expected lifespan of a battery using the virtual battery tester. There are several factors that can influence the life expectancy of your battery, such as corrosion or weather, and this can influence the accuracy of the test.

How Can You Replace a Dead Car Battery?

In spite of the fact that a car battery could always be replaced in an auto shop, it is something you can easily replace yourself at home if the battery goes dead. There are a few things that you should keep in mind if you decide to take the DIY route instead of hiring a professional to do it for you.

How Often Should You Replace Your Vehicle’s Battery?

In the event that a mechanical issue is causing your battery to run less efficiently, you may be able to extend its life simply by fixing that issue. Battery corrosion can be removed by your auto technician, bad cables and alternator parts can be replaced, and circuitry problems that drain your battery can be found.
There comes a time when all car batteries reach their end of life. When your battery is no longer capable of supplying power to your car, watch for specific warning signs. A starter solenoid that does not receive enough power can cause dim or flickering headlights, difficulty starting or a refusal to start, and a clicking sound.

What are some tips for preventing car battery problems?

There are some simple preventative measures that can be taken to make sure your car battery lasts as long as it should. The first thing you should do is schedule regular maintenance inspections which should include checking the voltage of the battery. The battery may appear to be fine, but your technician may observe abnormal electrical activity that might cause the battery to drain more quickly.
You can also avoid the untimely death of your battery by driving with smart driving habits. Once you have finished driving, make sure all lights and other electrical devices have been turned off. Make sure all chargers and devices connected to the computer are unplugged. Avoid unnecessary short trips & extreme temperatures when planning your drives.