What are Four (4) Stroke Engines?

So, let’s know more details about the 4 stroke engine parts and their work. These parts are the same as for any engines with slight changes.

The four-stroke engine has the following parts,

This is the center, or you can call it the foundation of the engine. The engine block holds the other parts of the engine. You can understand it as a big block containing various small blocks inside.

Engine blocks are made up of cast iron or aluminium alloy material. Aluminium blocks are lighter, have better heat transfer, and iron blocks have advantages like durability and clearances.

The piston-like we have already discussed, it’s responsible for the strokes and operation of the 4 stroke engines.

Also, it improves heat transfer and maintains the oil quantity between the piston and the cylinder wall.

These are connected to the piston as well as to the crankshafts. They have the I-beam construction for getting strength.

Also, there’s a pinhole through the bearing on the big end of the connecting rod, which accommodates lubricating oil to lubricate the piston and piston rings.

Just like its name cylinder head is the top of the cylinder block. It acts as a cover for cylinders and pistons.

We will see it in more detail in the working of 4 stroke engines. 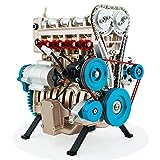 We have discussed above a little bit about valves. The two types of valves are provided;

The intake valve welcomes the air-fuel mixture to flow inside. Whereas the exhaust valves flow the exhaust out of the cylinder. One of the valves is closed during the other operations.

A flywheel is one that transfers the engine power to the wheels through a transmission. Flywheel helps to reduce the pulsation, which happens in the case of 4 stroke cycle operations.

We have seen the functions of valves, but the opening and closing of the valves are controlled by the camshaft. It is basically a shaft as per the below image.

There is a lobe like the structure of the camshaft for each valve. It is located either in the engine block, overhead or double overhead.

Lifters act as a link between the cam and valves. As the name shows, they lift when the camshaft lobe rotates. There are two types of lifters,

These are used in different combinations to help connect crankshaft to the camshaft. They adjust the valve’s opening and closing timing with the movement of the piston.

Just like the cylinder block contains all the parts required for the operation in its block.

The basic terminologies are,

Let’s try to understand in brief,

So now you know the basic terminologies used in the engines. Now the working of 4 stroke engines would be pretty easy to understand let’s know its working now.

So, before going into the working process, the 4-stroke engine has different cycles. Named as Otto cycle (pretty much popular in gasoline engines), diesel cycle, and Atkinson’s cycle. One of the most popular is the otto cycle. It is named after the scientist Nicolaus August Otto. The working principle of four stroke engine is explained in few steps,

The first stroke in the four-stroke cycle engine is the intake stroke. The piston is at the top dead center (TDC) and then it moves down to the bottom dead center (BDC).

The second stroke is the compressions stroke. The piston is at the bottom dead center (BDC) after the intake stroke.

This is the power generating strokes. By this stroke, the power is generated, and the ignited fuel is expanded.

This is the final stroke in which the expanded gases are to expelled out of the cylinder. The piston is at the bottom dead centre (BDC) at the end of the power stroke.

Again, the intake valves are opened, and the new fuel is entered into the cylinder. The cycle continues again and again in seconds. The cycle keeps repeating. The order doesn’t change. A few things to note from the working of four-stroke engines.

There are various changes made according to the efficiency and stability requirements. Like,

Now let’s check out some advantages and disadvantages of four-stroke engines.

The four-stroke engines created less pollution due to no oil burning. Compared to a two-stroke, which makes lot of exhaust smoke due to the oil being burned and the fuel. In the four-stroke engines, the oil is kept away and separate from the combustion chamber, which ensures only gasoline gets burned during combustion.

The two stroke engines are made for high RPM speeds, which wears fast. The more engine runs, the quicker it will wear. The four-stroke engines have to complete 4 strokes at less RPM.

No requirement for extra oil

Only the moving parts in the four-stroke engines need the lubrication.

More reciprocating parts, more parts to worry about hence challenging to troubleshoot the problems due to intricate design.

Not as powerful as two strokes

It is evident that a more significant number of parts and intricate designs are costly than two-stroke engines.

There are more advances made in the four-stroke engines. Like, adjusting the valve timings and supercharging, etc. They are getting improved with every advancement made in their working as well as designs.