In this article, we will learn all the basic details of a ball valve along with the definition, types, manufacturing, parts, working, applications, advantages, disadvantages, etc.

What is Ball Valve? Definition

A ball valve is a flow control valve that operates by turning a ball inside it quarter turn along its axis. The turning motion of the ball controls the amount of liquid flowing through the valve.

Ball valve consists of a valve housing that houses a spherical-shaped ball inside it. The ball has a through bore in it to allow the flow of liquid from one side to another. The flow of liquid is therefore controlled by controlling the position of the ball with respect to the flow of liquid. When the bore of the ball aligns with the direction of flow, the valve is said to be in the open position and allows the liquid to flow through it. The flow is restricted when the axis of the bore is stationed perpendicular to the direction of flow.

Both the ball and the ball housing are made of stainless steel. A stem is passed through the housing from the top which connects the handle with the ball. A rectangular slot is provided on the top of the ball where the stem sits firmly. The other side of the stem is bolted to the handle.

Therefore, when the handle is turned, the stem turns the ball to allow or restrict the flow of fluid. Valve seats are generally made of Teflon in case of low temperature applications, but the material varies based on other types of applications. Sealing rings are further provided on valve seats to prevent leakage of liquid due to damage to the valve seat. Similarly, O-rings are provided on the valve stem to seal the gap between the valve stem and the valve body and prevent any leakage.

Types of Ball Valves in general

This is the most commonly used type of ball valve. Here the stainless steel ball is in a compressed position between two flexible valve seats and is held in contact with only a stem on top which controls the position of the ball. There are no supports on the bottom giving the effect that the ball is floating.

This type of ball valve is mainly used for low to medium pressure applications.

The valve seats are made of PTFE material. Thus, when the ball is in the closed position, fluid pressure acting on the ball forces it against the soft PTFE seats providing a solid seal against leakage.

Hence due to additional support on the bottom, these types of valves are used also for high pressure applications.

The mechanical anchoring from the trunnion also absorbs the pressure from the line thrust. This in turn reduces the wear of the valve seat due to the extreme rubbing of the seat against the ball under the influence of high pressure when changing between open-close positions. 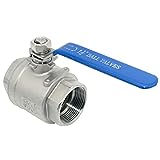 Types of Ball Valves based on flow control characteristics:

V port valves have a ‘V’ shaped ball groove or a ‘V’ shaped valve seat that is precision machined which allows for desired flow rates of fluid between 0° to 90° of ball rotation.

These valves provide close to linear flow characteristics and minimize pressure drop between inlet and outlet. Hence, these valves have higher flow coefficients compared to other valve types of similar size.

Full bore type valves are mainly used for pipelines used for the transfer of viscous fluids as this type of valve provides almost negligible flow resistance.

In reduced bore type of ball valve, the area of the bore in the ball is smaller compared to the internal diameter of the inlet flange. This results in a reduction in the rate of flow of fluid through the ball.

Reduction in flow causes increased pressure difference between fluid at inlet and outlet of the ball valve. It also increases the resistance to the flow of fluid.

Reduced bore valve types are however lighter in weight and are smaller in size requiring lesser space and are most suitable for pipelines transferring gas and fluids having similar physical properties to water.

Types of Ball Valves based on design

Split type ball valves are valves manufactured in 2 or 3 parts and then connected together using nuts and bolts or threaded joints.

Each part is manufactured individually of steel by the process of casting or forging. Casting is generally used to manufacture more complex split valve designs.

In 2 piece split valves, the valve housing and inlet flange is constructed as one single unit and the outlet flange as the other unit.

In 3 piece split valves, the valve housing, the inlet flange and the outlet flange are all manufactured as 3 different units.

Advantages of split type ball valves include ease of maintenance as each component is separately manufactured and connected. Also, there is no need to replace the entire ball valve assembly if there is any kind of external damage. That individual unit can only be replaced.

In 3 way ball valve fluid can flow in 3 directions. It allows to shut or open flow in any direction making the fluid flow in the desired direction.

In 4 way type, fluid is allowed to flow in 4 directions. They are normally used for X configuration

Types of valves based on the method of actuation:

Pneumatic actuators use the pressure energy of air to produce mechanical motion of the valve. The actuator consists of a piston cylinder arrangement. Compressed air acts on the piston to produce a linear motion between the two dead centers. The piston could be double acting or single acting.

In case of double acting piston, air is entirely responsible for the to and fro motion and in case of a single acting spring force is used along with compressed air.

To convert the linear motion of the pneumatic piston a rack and pinion arrangement is used. The rack is connected to the piston rod of the piston. The pinion is fixed onto the valve stem of the ball valve.

Solenoid valves are used to regulate air supply to the pneumatic piston. Electrical signals from the control unit are communicated to the solenoid valves according to which it supplies air to the actuator.

Electrical actuators use electrical motors to convert electrical energy into mechanical motion of the valve. The motor could be AC or DC powered.

The shaft of the motor is coupled with the stem of the valve. As the motor turns, the valve stem also rotates thereby opening the valve.

To compensate for the high torque requirements to open and close large size ball valves, gear arrangements are used. The shaft of the motor is coupled to the valve stem via a series of gears to multiply the torque produced.

Electrical actuators, unlike its pneumatic counterpart is used for accurate positioning of the valve anywhere between 0° to 90° of valve rotation. This way flow rate of fluid through the valve can be effectively controlled.

Limit switches are used to cut off current to the motor when the valve reaches full close and fully open position.

In case of fire in the vicinity of a ball valve, the heat causes the PTFE valve seat to melt. This results in the valve to start leaking and this might aggravate the hazard created by fire.

Fire safety type valves thus contain an additional metallic seat that comes into action as soon as the PTFE seat fails thus preserving the integrity of the valve.

As seen in the diagram, as the PTFE seat fails, the metallic seat automatically comes in contact with the ball.

Forging is one of the oldest manufacturing methods known to man and has been used extensively for valve manufacturing. Forging is a process in which metal is heated up to its recrystallization temperature and then subjected to compressive forces to give desired shape to the metal. The compressive forces are given using hammers or in this case hydraulic presses. For stainless steel forging, Chromium dies are fixed to the hydraulic presses which then apply tons of amount of forces on to the metal.

Dies used can be open or closed type.

Open dies produce parts close to the desired accuracy. Machining of parts is then required largely to eliminate the discrepancies.

Closed dies produce parts to much higher accuracy and require very little machining once forging is completed. This type of die can therefore be used to produce complex parts.

The process of forging develops a refined grain structure for the metal. This provides the metal with reduced hardness and increased strength. The valves manufactured by forging can then be used for high temperature and pressure applications. Also, the defects produced in this type of manufacturing is comparatively lower.

For the purpose of manufacturing valves, stainless steel and carbon steel are used.

After the casting is completed, heat treatment is carried out on the cast which includes the following:

The products manufactured by casting have excellent dimensional accuracy and require little to no machining. However, casted products are prone to certain defects if the processes are not carried out properly.

The defects are identified during the testing process where destructive and non-destructive techniques are employed.

Valve does not hold i.e., valve is leaking

Opening and closing torque too high

Ball valve as explained earlier consists of a rotating ball connected to a handle via a stem. As the handle is turned, the ball rotates as allows the liquid to flow through the bore in the ball.

Globe valves require several turns of wheel to open or close the valve. Ball valves can be quickly opened and closed by just 90° turn of handle.

Globe valves are comparatively heavier and larger in size to ball valves. Globe valves however also have a non rising stem type which allows it to be used in restricted space.

Ball valve due to its flow and pressure control properties finds its industrial use in mainly the oil and gas industry.

They also find applications in residential and chemical storage facilities as well as in the food industry which includes milk and dairy, bread, and baked goods.

In case you have spent a lot of time driving at night and have already learned all the safety tips and tricks, it may be possible that you already know them all. But unfortunately, if you had just...

A cold-cutting process, as the name implies, it is a method of cutting without the use of heat. This efficient slice or cutting system is used in a variety of industries such as material processing,...