Piezometers are geotechnical sensors that measure the pressure in the ground based on the flow of pore water. In soils, rock fills, concrete structures, and foundations, the instrument measures changes in pore water pressure. Piezometers measure pore pressure along with its distribution and variation over time, providing quantitative information about the magnitude of the pore pressure.

Understand where potential piping can be installed, how effective controls are, and what causes seepage. This is one of the most important geotechnical monitoring instruments, so studying it is of interest.

What is Piezometer? Definition, Function

How Does Piezometer Work?

Let’s see the working process of a piezometer: 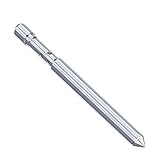 Understanding the Calculations by Using the Formula

The diaphragm in a piezometer deflects proportionally when its pressure changes, which then affects the tension applied to the stretched wire. The tension in the wire is directly affected by any change in pressure within the pores.

Wires are pulled by coil magnets using electric coils. The resonance of the wire has a frequency ‘f’ that depends on the tension in the wire, which can be calculated as follows:

Inducing the wire to vibrate is the alternating current produced by the resonant frequency of the coil magnet. Since pore pressure is proportional to frequency squared, the piezometer readout logger allows you to display it directly on the screen. Alternative methods, such as manual methods, may be chosen when convenience is more important than cost.  Readings can also be taken less frequently with this method. The automated system allows for more readings to be taken and more data to be generated. It can also improve safety and health for employees and reduce the carbon footprint of work sites by reducing lone worker visits. Rather than just seeing snapshots or revealing daily or seasonal changes, clients will get a fuller picture of what’s going on.

Pore-water pressure can be measured using several types of piezometers. It is possible to install them in a variety of boreholes as well as in fills. As the cornerstone of soil-water interaction, effective stress is a fundamental component of soil mechanics. Therefore, it is crucial to understand the pressure within pores.

Following are the benefits and drawbacks of different types of piezometers used in geotechnical surveys:-

One of the simplest forms of piezometer, the Casagrande piezometer is often referred to as the easiest piezometer. There is usually an open pipe between the filter and the tube in an open standpipe piezometer.

It is necessary to take into account a part of the standpipe that sticks above ground level when calculating the pore pressure. The method of open-ended piezometers can be used to determine the permeability in situ. This is done to find out where the top of the standpipe meets the water level inside.

Diaphragm piezometers are used to detect pressure changes in boreholes or fills. To provide extra durability, a sand pack can be applied around them instead of grouting.

Benefits of using the Diaphragm Piezometer

Drawbacks of using the Diaphragm Piezometer

An air diaphragm is applied pressure to produce a piezoelectric effect in a pneumatic piezometer. On one side of the diaphragm, water pressure acts, while on the other side, gas pressure acts.

Under water pressure, allowing the diaphragm to return to its original position would decrease the pressure of gas passing through the piezometer, preventing gas from escaping through the vent tube. When the water pressure and gas pressure are equal, pneumatic indicators’ pressure gauges will display the same reading as gas regulators.

Benefits of using the Pneumatic Piezometer

Drawbacks of using the Pneumatic Piezometer

Signals are also capable of being transmitted over long distances without degradation. They are also somewhat resistant to interference from external noise and damp wiring conditions.

Stainless steel body with an electron beam welded to the diaphragm surrounds the vibrating wire and coil magnet assembly of the Model EPP-30V vibrating wire piezometer. In order to protect the sensor from water and other corrosive materials inside, the welding creates a vacuum of about 1/1000 Torr.

Chemical corrosion is not a problem for the piezometer because of its stainless steel body. Ceramic flat filters with grain sizes of 40-60 microns and a low air entry value are used. In mass concrete structures, brick foundations, dam foundations, foundation soils of structures, reclaimed land soils, etc., water penetrates the internal pores or seams. Consequently, the ceramic filter is put under pressure.

In small diameter boreholes, slim size piezometers are used to measure pore pressure. An electron beam welding process is used to weld the sensor, and a vacuum of around 1/1000 Torr is created inside it, similar to the EPP-3-V. It contains a ceramic flat filter with a grain size of 40-60 microns with a low air entry value. A cable is connected through the glass to metal seal exactly as with the Model EPP-30V, but if desired, the piezometers may be supplied with the requisite length of cable.

Low-pressure piezometers, such as the Model EPP-60V, are designed to measure low water pressures. It is convenient to use the basic pressure sensor for measuring water pressure and level in boreholes. Groundwater level, groundwater pressure, and their variations over time are provided quantitatively.

Water level evaluation helps monitor the behavior of the structure and its foundation after construction, indicating any potentially hazardous conditions that could affect their stability. Moreover, it provides basic information to promote safer and more economical design and construction.

Hydraulic piezometers measure the forces exerted by fill materials, such as embankments, but they can also be used in boreholes. A water reservoir is connected by water-filled tubes to a pressure measurement device in this type of filter. The pumps circulate and remove air from reservoirs by pushing them long distances. It consists of a water reservoir and a high-entry filter tip.

Piezometers may contain air when pore pressures are negative in the ground, as they are in compacted clays. Due to the negative pore pressure in the ground, this occurs. A water connection must be maintained between the piezometer and reservoir in order to function accurately and to measure pressure accurately. For the air connection to be maintained, the air must be removed from the reservoir.

Benefits of using the Pneumatic Piezometer

Drawbacks of using the Pneumatic Piezometer

There are many types of piezometers, all of which contain porous stones or tubes with perforations attached to them and supported by a plastic standpipe. Piezometers are mainly used in the field in two types: open standpipes and Casagrandes.

Porous sections of pipe would be inserted into boreholes and positioned in a way that could measure porosity using the porous section.

Porous filters are placed in the middle of bare holes with annuli filled with sand between them with the sand sealing both sides of the annulus. In response to the groundwater pressure, the water is forced into the standpipe until it reaches the piezometric level above the floor of the porous filter at the elevation where the standpipe water meets the groundwater pressure.

Vibrating wire piezometers and pneumatic piezometers have been in use for many years, but the most effective method of installing them has generated some debate over the years.

In the traditional method of installing an air conditioning system, a hole is drilled into the ground up until the target strata, which is the geologic level where the particular system should be installed.

Piezometers are placed in boreholes using a sand or gravel layer that surrounds the tip of the piezometer 0.6 meters to 1 meter deep in sand or gravel. A bentonite pellet seal is applied on top of the borehole creating an impermeable seal, followed by 1 meter of bentonite pellets. Sealing the installation properly is one of the most important parts of the installation.

In recent years, however, there has been an increasing number of piezometers being installed using a method in which the grout has been fully embedded.

Following are the steps in the procedure:-

According to this theory, water pressures are transmitted through the ground horizontally in a horizontal direction.

This method was initially viewed as a potential source of concern as there was a concern that the water pressure would be transmitted up and down the grout column instead of being represented locally by the piezometer tip. While this has not proven to be the case, this alternative method has now been accepted widely as a viable alternative method that is more commonly seen in specifications as it has been found to be effective.

What are the applications of the Piezometer?

Piezometers measure groundwater level and porewater pressure. Engineers can also benefit from their help with the following things:-

Various use of Piezometer for Embankments

Various applications of Piezometer for landslides

Various applications of Piezometer in relation to Dewatering

Piezometers can be used for a variety of purposes, including:

By allowing water to enter, soil and rock pores lose their ability to hold structures. Soil or rock that has more water in its pores will be less likely to be able to bear weight. Structures built over such soil fail and are destroyed.

Piezometers are used to measure the level and flow of groundwater, one of the most fundamental resources. The phreatic line can be determined by measuring water flow patterns in earth, rockfill, & concrete dams.

It is important to record both pressure and temperature data when a piezometer is installed in a zone whose temperature is likely to fluctuate significantly. This will allow you to evaluate the effects of temperature on pressure readings.

How to Install Piezometer?

The most effective method to install vibrating wire piezometers and pneumatic piezometers has been debated for many years.

Piezometers have increasingly been installed by embedding the grout fully in the grout in recent years.

This procedure consists of the following steps:-

The transmission of water pressure is based on this theory. As a result of this method, water pressure could be transmitted up and down the grout column instead of being represented locally by the piezometer tip. Despite the fact that this alternative method has not proven to be effective, it is now accepted as a viable alternative and is more commonly seen in specifications. The ground should be horizontally oriented.

Check out our ‘MechStudies – The Learning App’ in iOS & Android

You can get Centrifugal Pump Reference Book

Check out our most interesting articles,